Regina Daniels Launches Her Youtube Channel; Talks About Her

Nollywood actress Regina Daniels now has a Youtube Channel on her new family. She has just announced the start of her new YouTube channel which she would be discussing about her life and her new family (The Ned Nwoko’s family).

Regional has also told her critics to see her as an adult after recently getting married to 59-year-old billionaire, Mr Ned Nwoko, in Delta. 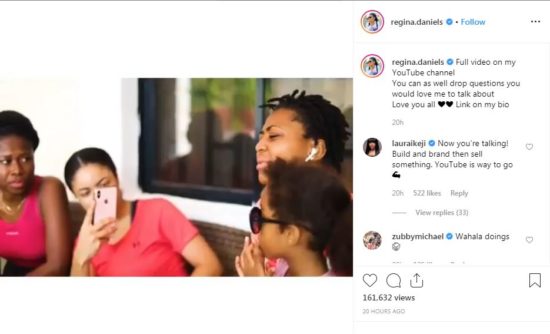 The 18-year-old actress has been criticised for marrying her older partner because of his money.

But Daniels in a video captioned “13 things you don’t know about me”, said she had been an adult since birth.

he video shared on her Youtube channel, Regina Daniels TV, saw the actress also talking about her lifestyle and her journey so far in the Nollywood movie industry.

She also talked about other challenges she had faced in life while growing up as a kid.

The actress promised to grant fresh interview on her relationship status.